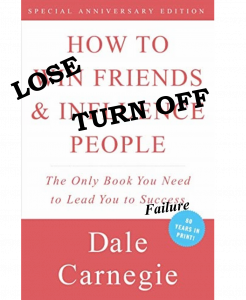 Someone I am close to says or does something that rubs me the wrong way. Or they insist I do something I don’t want to do. With most people in my life, this presents no problem. I feel comfortable expressing my opinions and desires to them. With others, however, it is much more difficult. (I won’t go into what makes the difference but I imagine others can relate and make their own list of the challenging folks in their lives.)  I tend to give in to these people or, as I like to call it, “cave”. That’s Relent.

Then comes Retreat.  When I’m upset, I just want to get away from the other person, literally and emotionally. This is the stage during which I come across as tense and quiet. This can last minutes (especially if a drink is available to loosen me back up), weeks, months, or forever, depending. Perhaps paradoxically, the more significant the relationship and the more invested I am in maintaining  harmony, the more I want to retreat and avoid them when I’m upset.

Resent comes next and I think all readers know what that feels like. It’s generally some combination of helpless blame and self-blame.

And for the Grand Finale: Ruminate. This is the interminable phase of mentally replaying the scenario over and over again. I get stuck in never-ending loops where I alternate between fantasizing about handling myself with more maturity and grace or else giving the other person a piece of my mind. I’ll probably triangle* in others to complain to but talking directly with the person usually remains an unfulfilled fantasy.

Version #2 is the same as Version #1, except the Four R sequence is initiated by exploding and lashing out or, as I coyly refer to it here, Rage. It takes a loooong history of engaging in Version #1 before #2 bursts out of me like that memorable scene from Alien.

Both Version #1 and Version #2 of the Four Rs are examples of what I have learned to refer to as “No Self” behavior. What that means to me is that I am handling a situation in the automatic way I learned early in life. Rather than seeing differing desires as opportunities for open exchange and negotiation with someone I care about, my brain and body interpret them as potential threats. Naturally, my fear of conflict or rejection can trigger an outcome of conflict or rejection.

If the Four Rs are “No Self”, then what does it mean to act from “Self”? I think of behaving from Self as exerting some control over my inherited and learned patterns of behavior, as well as some independence from my own emotional/physical threat response. A list of qualities I strive for in acting with Self include:

Acting from Self presents the classic journey versus destination situation. Why keep at it when it’s such hard work? Because  the Four Rs feel just terrible and losing friends and turning off people is no fun!