To Hug or Not To Hug-Is that The Question? 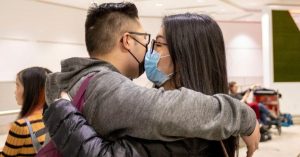 Way back in the early days of COVID-19 things were different than they are now, nine months later. All the public knew then was to socially distance, wash hands more and longer and do not, under any circumstances, touch the face. The great mask controversy was yet to polarize the nation.

In the middle of that uncertain period I ran into a “huggy” friend. When she stretched out her arms to me I demurred. But when she made the gesture again, with an “aww, come on, it’s just me,” expression on her face, I accepted the hug. Inwardly, I berated myself for putting myself at risk out of fear of hurting her feelings, (more accurately, the discomfort I would have felt if she were to get upset).

Included among the many challenges introduced in 2020, nearly every single person on the planet faces the same dilemma, knowingly or not, that I did at that moment: Do I act based on my best information about the novel coronavirus, or based on the emotional and relationship systems of which I am a part?

Although much knowledge has been gained since last March, there continue to be many unknowns. For example, no one can say for sure how long immunity lasts after an infection. Even with the information at hand people can reasonably debate about how to handle the risk of contagion. But facts alone don’t guide behavior. People are instinctively prone to going along with those around them, sometimes against their best interests. This can be a conscious decision, as it was when I knew better than to be giving random hugs during a pandemic. More often the behavior is automatic and justified by thinking that aligns with the prevailing sentiments.

I imagine it’s difficult to wear a mask when those around you think the virus is a hoax, just as it’s difficult not to wear a mask at Whole Foods. Speaking of Whole Foods, last time I was there a man in line refused to wear a face covering. When asked to put one on, he became belligerent and threatening, visibly upsetting all of us “maskers”. (Funny thing though, in the end he put on a bandana rather than leave the store in support of his principles. I guess he really needed something he could only buy at Whole Foods!) This man showed another side of reacting within the emotional system-reflexive rebellion.

It’s my guess that most of the folks featured in videos where they are upending displays and screaming at employees about taking away their “freedom” are people for whom it is typical to take an oppositional stance. This would stem from their habitual position in the emotional relationship systems of their families.

Deciding whether or not to hug, or to wear a mask, provides but two of an infinite number of opportunities for the human to choose based on intellectual reasoning or the pressures of a relationship process. Often, action is influenced by both.  Biologically based sensitivity to the emotional field is part of evolution and essential for survival, yet perhaps the ability that makes the human unique among all life is the capacity to discern fact from feelings generated within the emotional system. For sure, that capacity is underdeveloped in most people and hardest to access under stress, contributing to-if not outright causing-this pandemic and every other pickle currently faced by this species.

To hug or not to hug is not really the question. The better question is: What drives what I am doing right now, my best individual thinking or my instinctive, automatic, sometimes unreliable reaction within the emotional system?